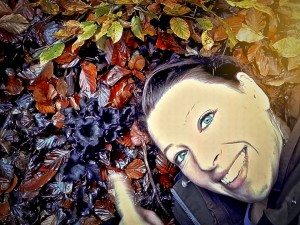 The trumpet of death, or horn of plenty (Craterellus cornucopioides), is one of my most favourite wild mushrooms, and one of the hardest to find! Superbly camouflaged with the leaf litter, this funereally-coloured, unassuming and misleadingly-named gourmet ‘shroom is an exciting find for any forager in the UK. It is listed as ‘uncommon’ (which indeed it is) as well as being notoriously difficult to spot, even when it is pointed out to you…

After years of fruitless searching, I finally stumbled across my first-ever patch of black trumpets while taking my dad out on his maiden fungi foray near where my parents live (and where I grew up) down in Hampshire. I squealed with joy and danced around, so excited to have finally found this elusive quarry for myself! My dad looked around puzzled as to what I was celebrating about and was surprised that my inexplicable elation was due to the unremarkable grey-and-black thing sitting in my hand that he would never have noticed in a million years, nor would he ever have thought was a prized edible mushroom.

It was the last weekend in August, 2010 and so they were only half-grown (as I now know), each about 2-3 inches long and not yet frilly-edged and convoluted. That said, we picked 90% of them and filled my deep basket to brim, as well as also finding my very first ceps (Boletus edulis), millers (Clitopilus prunulus) and chanterelles (Cantharellus cibarius) in the same spot – three other edible species that had so far eluded my in my searching up in Yorkshire.

That day taught me an incredible amount about the habitat that black horns, ceps and chanterelles like – and also how very much easier it is to find amazing edibles in southern ancient woodland! I’d been trying really hard to find good edibles up north with not much success until that point. No wonder all these TV forager were finding this stuff so readily in their shows – they were all in the south… I go into an old forest down there and suddenly I’m tripping over choice edibles!

I have since used this similar habitat knowledge to target similar-feeling spots in Yorkshire and all over the UK and this was the breakthrough I needed. I now have many, many locations for ceps, a few great places for yellow chanterelles, and was also shown one other epic local place for black trumpets – (a super-secret spot I shall never reveal because it’s so incredible!) I taught myself to forage from books, which is why it took so long I think. If I’d gone out on forays with experts earlier I expect I’d have learned and been successful much more quickly. But hey, that’s all part of the journey!

Every autumn I check that trumpet spot I discovered in 2010, and every year since I have been pipped to the post by other foragers. By checking the area whenever I was down south, I noticed that the fruitbodies started appearing in teeny-tiny form around the tree roots in early August, and they’d all be picked (probably while still quite small – boooo) in September, but occasionally I’d get lucky and find a few spectacular specimens hiding under holly bushes as late as the end of October that had been missed in the big foraging sweep and had been allowed to grow huge. Through regular monitoring, I’d never seen black trumpets flush again in the same spot within the same year so I had concluded that they must be relatively slow-growing species that only fruits once a year.

I was down with my folks this weekend for an early Christmas family gathering. I managed to sneak off to the woods on the Monday before travelling back up north, and I had the most amazing day… it was the first week of December and I was hunting for winter chanterelles (Cantharellus tubaeformis), as they are very much in season now. I thought I might also find some grey oysters, and perhaps a couple of hardcore hedgehog mushrooms just hanging on ahead of the frosts. I did *not* expect to find black trumpets!!

And yet, find some I did! Knowing that winter chanterelles like similar habitats to black trumpets, I went to look in my favourite wood, where I found those first horns in 2010. I couldn’t believe my eyes when I noticed black amongst the leaves and realised the mild extended autumn had resulted in a second flush! It was a stunningly sunny day, no breeze, it was just magical. I did also find winter chanterelles as predicted, double-whammy. I wandered on to other spots nearby and discovered loads more winter chanterelles and even some creamy young hedgehog mushrooms and yellow chanterelles clinging on. An unexpectedly fabulous day!

I think I might go back down very soon, if the mild weather continues…! Winter chanterelles dry very well and will keep me going until the foraging joys of spring start emerging.