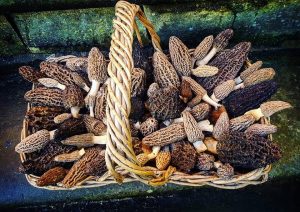 Surrounded by tall stark office blocks on all sides was a set of landscaped planting beds, mulched in barked woodchip, brimming with huge morels… the biggest were 6″ long!! ♡

Thousands of people walk past there daily, staring at their phones… gourmet mushrooms hiding in plain sight ♡

The black morel is often listed as Morchella elata in fungi books, but ones like these found on woodchip are now specified as Morchella importuna. I must travel away for ‘day job’ work more often it seems!!